Conjunctions Made Easy: The Ultimate Guide for 2021 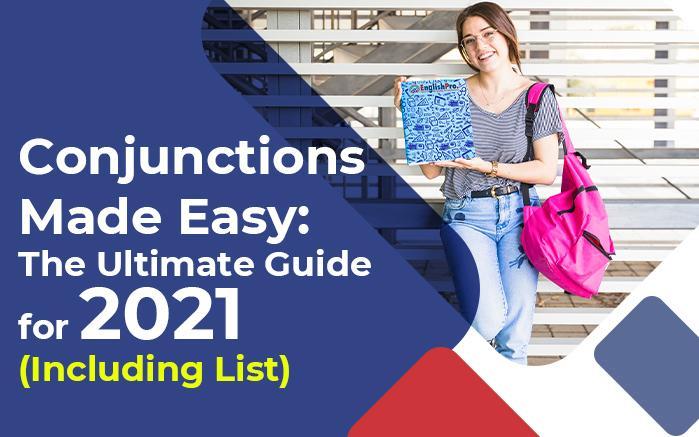 When learning English grammar, hordes of people stumble upon the conjunction and wonder what it is and what the purpose is. This guide will be highly beneficial for those who want to learn the use of conjunctions and make their grammar impeccable.

So, what is a Conjunction?

A conjunction is considered among the nine parts of a speech.  The need for conjunction arises to link thoughts and ideas within a sentence.  It lets people make clear and elegant sentences by eliminating the complexity of short sentences.

For better understanding, you can consider conjunctions as ‘the glue’ of a phrase.  Without the use of conjunctions, sharing ideas and thoughts with a flow is not possible.

Let’s understand it better with an example.

“That guy has a radiant smile and afit body. He has a majestic beard with brown eyes, and he is wearing a black coat on top of a check blue shirt.  Definitely, he has some great sense of styling.”

After seeing words highlighted in bold, it is crystal clear how conjunctions bring thoughts together and make a flowing sentence. Now, let’s see how the wording would be without the use of conjunctions.

Due to too many words and sentences, it does not sound audibly appealing. Consistency is imperative when using conjunctions.

Conjunctions may not seem astonishing, but they essential for making appealing sentences. They help people bring their complex thoughts together. These are used in everyday life in written and verbal communications.

It is whimsically essential to know that they serve various purposes when used. For example, “So” highlights a phrase, word, or clause.

There are many pairs of correlative conjunctions. You can use the below-mentioned correlative pairs to structure your sentence.

Some of the examples of correlative conjunctions are:

Many times, teachers tell their students not to begin a sentence with ‘Because.’ They do it to prevent students from writing sentences with fragment errors. However, some students start believing that a sentence starting with because is wrong.  The matter of fact is that ‘Because’ is a subordinate conjunction, so it can be used at the beginning of a sentence.

Here are some of the most-used subordinating conjunctions:

Learning English grammar is a vital first step in developing fluency in English.  We’ve tried to make this Conjunctions guide as concise and easy to understand as possible. If you are serious about making your English impeccable, we recommend joining a reputed institute for English speaking course in Chandigarh. Getting excited yet? You should be! The journey of English learning is fascinating and brings lots of fun. Stay tuned for our next blog.